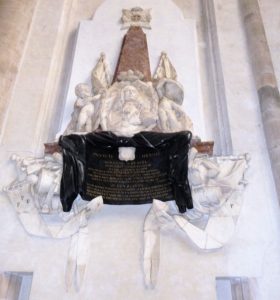 My ancestor, Jan van Brakel, is buried in St. Laurenskerk Church with one entire wall dedicated to him; he has a large monument where he is buried in the back of it.  There are approximately 17 Admirals from the 17th Century who are buried in the St. Lawrence Church.  They helped win Anglo-Dutch Wars and are considered Heroes in Dutch History.  There is an entire wall dedicated to each Admiral.

This impressive gothic church was completed in 1646, but was destroyed due to the bombing during World War II. It is all now that is left of Rotterdam’s medieval buildings as the rest were also destroyed during the War, but not restored. Luckily, the church has been restored, including all the gothic tracery at the east end. Although the church is gothic throughout, the interior is paneled in some areas, which softens the otherwise harsh interior. In addition, the colored glass in the windows makes the interior seem bright and welcoming. What can be found inside? Tombs of 17th century admirals, three Danish organs (the largest of which stands on a marble base), bronze doors created by Giacomo Manzu on the theme of War and Peace, and a statue of Erasmus, Rotterdam’s most famous son. Guided tours and special tower visits are available if you are thinking of a visit (which I highly recommend)!